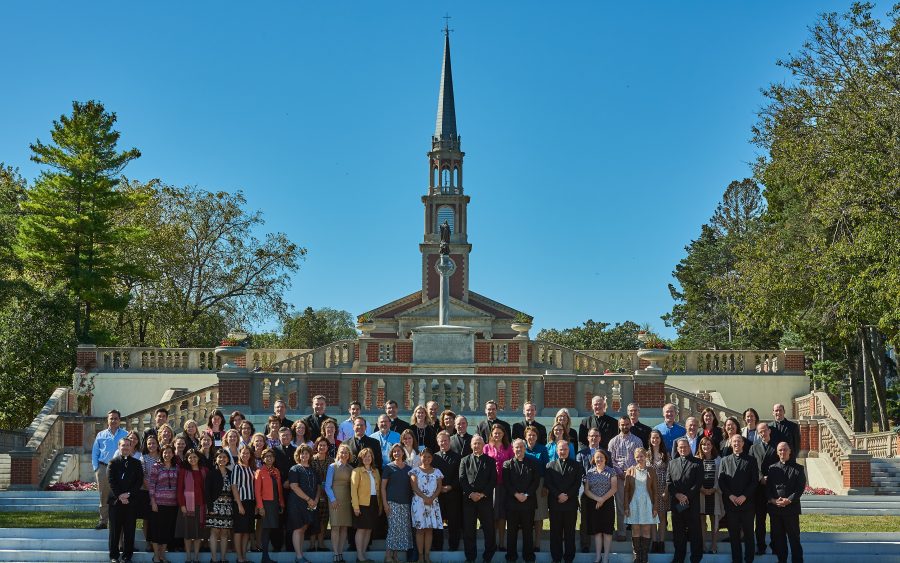 Dear brothers and sisters in Christ,

As many of you know, we have now concluded all three territorial assemblies regarding the Draft General Statutes of Regnum Christi. The three assemblies have sent the minutes, conclusions, and voting from their sessions to the organizers of the General Assemblies, and the General Chapter, that will take place in March and April.

After speaking with Nancy Nohrden, the Territorial Director of the Consecrated Women, it seems that her and I had similar experiences at both the joint territorial assembly and our own branch assemblies, Nancy with the Consecrated Women of Regnum Christi and myself with the Legionaries of Christ.  I want to take this moment, while it’s all still fresh in my mind, to share these experiences with you. Here are three things that personally resonated with me deeply.

First, I was struck by the common love for the charism that all the assembly delegates seemed to share and exude. The strong desire to serve the Church through our mission of forming apostles was palpable. We have always stressed the importance of loving the Church and desiring to live and serve the Church in all we do. The outward-direction of our apostolic activity has always made Regnum Christi members noticeable for the joy with which they live their faith. That spirit was alive and well in the Assemblies. As the draft statutes themselves say, “The Regnum Christi Movement finds its meaning in the Church in its mission…its members recognize that they are consecrated through baptism as ‘living stones’ of the Church, which they love with a filial love and seek to build up” (#16).  Experiencing the sincerity of this love and this commitment among my Legionary brothers and all the other assembly delegates renewed my own zeal and refreshed my own vocational commitment. I am sure I was not alone in that. We have been asked to do a lot of soul-searching as a Movement during recent years. We have also been asked to look inward, to reflect, to reform, to renew, and to reorganize. Through it all, we still recognize and resonate with the undeniable truth that the Movement is not a self-referential entity – it is a spiritual family eager to serve the Church and evangelize the world in creative and effective ways.

Second, I was struck, and profoundly encouraged, by the delegates’ openness. I had the impression that everyone truly felt free to say what was in their hearts and on their minds. Mutual respect, sincere and intentional efforts to understand differing points of view, and humble vulnerability marked each of the sessions that I took part in. I felt that this openness allowed me to get to know my fellow delegates deeply even in a short amount of time. I even felt that I came to know the people I’ve been acquainted with for many years, much better. Embodying this sincere openness and mutual respect, I am confident that we will stay docile to God’s guidance throughout what remains of this process. This mutually enriching approach to our renewal has been and will continue being a stimulus to ever deeper, more mature unity and charity among all members of the Movement and the Legion. We have learned so much about how to share in dialogue and we have been enriched by living a sincere communion.

Finally, I would like to share a personal experience that impacted me deeply as a Legionary. During our assembly, one of the topics was about the description in the draft statutes of what a Legionary priest brings to the Movement. It was moving to see all who wanted to contribute toward enriching that number. We wanted to include in the statutes some expression of how deeply we feel committed to being priests and religious fully and passionately at the service of the Kingdom of Christ. We truly want to be faithful to the call that each one of us received to be Legionaries of Christ, to be all-in for the Lord in the service of this great mission that we all share, the mission of rejuvenating this secular world by infusing it with the transforming power of the Gospel.

The results of the assemblies, at least in summary form, will be made public after the last assembly takes place at the end of this month. So, I would expect something to come out in the first few weeks of December. No matter the final results of the assemblies, we have to remember that these assemblies are consultative. They carry no juridical weight and no final decisions have been made. They simply give the delegates to the General Chapter and the General Assemblies an understanding of the thoughts and opinions of the Movement members and Legionaries on the different aspects of the statutes and the proposal to form a federation.

As the process continues into its next stage, I want to ask all of you for your continued prayers and to stay engaged in studying and discussing the statutes. In particular, please reflect on the specific gifts that each branch brings to the Movement. The Holy Spirit is opening our eyes to the beautiful harmony that these gifts create when they are all brought together in one common mission. I also want to assure you of my own prayers as this amazing journey through Christ, with Christ, and in Christ continues to unfold.