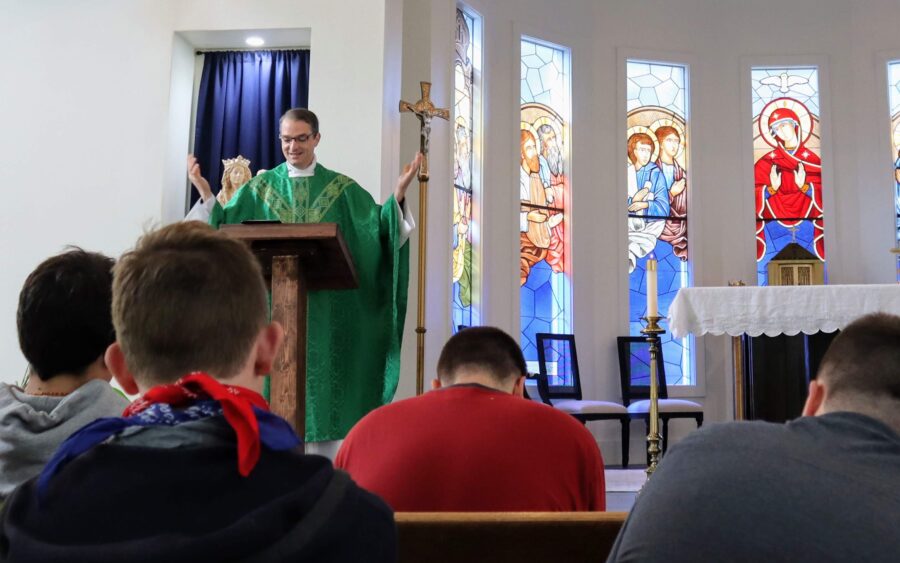 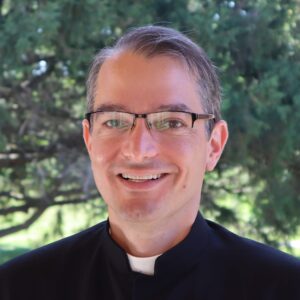 Father Juan José Hernández, LC, has been eager for the new school year to start. Beginning his seventh year as the Head Chaplain at Holy Spirit Preparatory School in Atlanta, Georgia, he’s part of a campus ministry team that includes two other chaplains, as well as teachers and lay people, all working together to minister to the spiritual needs of the school’s students, staff, faculty, and parents. And, according to Father Juan José, one of the main spiritual needs of all those he serves is the longing for community.

As a small college prep school with students from pre-kindergarten to 12th grade, Holy Spirit Prep strives to create a close-knit faith community dedicated to Catholic values and education, and it’s this caring, communal environment that Father Juan José believes is so important to the development of young people today. Normally, he would start his days on campus with morning Mass for the students, teachers and parents that arrive early, and spend the rest of his time building personal relationships with each and every student, having conversations, hearing confessions, attending after-school activities and sporting events or visiting with families. “I try to see as many kids as I can, with the intention of seeing everybody,” says Father Juan José. “Some students will definitely come by on a regular basis, be it for confession, or just to talk, and I like to be available, but also very intentional, to make sure that I’m at least trying to reach out to everybody.”

Building relationship with every student in the school through personal contact and communication can be challenging at the best of times, but the COVID-19 crisis, and the sudden closure of Holy Spirit Prep in the spring, made Father Juan José’s job of cultivating community that much harder. “The greatest issue facing the students, in the context of the pandemic, is not having that communication, those relationships with the other students,” says Father Juan José. “With the campus ministry team, and with the chaplains in a special way, it’s very natural there at school for the students to stop by, for confession or just to catch up, to talk about life, a moral question, difficulties they’re having at home. Just not having that… that isolation is very difficult.”

However, Father Juan José didn’t let the COVID pandemic – or the school closure – stop him from continually reaching out to try to create spaces of encounter and relationship with the current and past students and families of Holy Spirit Prep. During the first weeks of the pandemic, when the school initially sent its students home, Father Juan José spent much of his time performing house blessings for the families who were now suddenly self-isolating. And during the summer, he was busy continuing the relationships he had been building before the school had shut down. “I’ve spent a lot of my time this summer meeting up with alumni, reaching out, phone calls, or just getting together for dinner – finding ways to visit families, and creating opportunities for parents and students to come together,” says Father Juan José. One of those opportunities was an in-person graduation that the school was able to hold at the end of the school year, while still maintaining the social-distancing restrictions in place. “It’s a small enough school that we were able to get everybody together, something the students really wanted,” says Father Juan José. “They did not want another virtual ceremony, another virtual class. They wanted to do it in-person, and it was great that everybody came together, being able to keep the restrictions that we were given, and actually have an in-person graduation that was very meaningful for the students. It was a great witness to the importance that they give to our community.”

Father Juan José credits his own upbringing for helping him understand, and minister to, the universal longing for community that he encounters in his students. The third of four children, Father Juan José grew up in a faithful Catholic family in Puerto Rico, and it was in this domestic church that he cultivated an awareness of and appreciation for the importance of community. “Just coming from a good Catholic home, just seeing what family life is like, it’s been a blessing,” says Father Juan José. “I’ve seen a lot of suffering of families… and just having that experience of my own family life that, although it wasn’t perfect, was persevering helps gives perspective to the students.”

But perhaps what helps Father Juan José connect most with the young people to whom he ministers is his own experience as a young adult and university student. Before becoming a Legionary, Father Juan José was enrolled at Georgia Tech, where he was pursuing a degree in engineering. Part way through his studies, he realized that God was calling him towards a different path, and he left the school and his aspirations for a career in engineering to enter the Legion of Christ. This experience – of having been accepted into an extremely competitive field at a highly-ranked school, and instead, choosing to enter the religious life – is one that provides Father Juan José with insight into his students’ own dreams of success, as well as a perspective on what truly matters. “I explain that there are things that are beyond success and money… being an engineer and creating the latest technology. All these things, sooner or later, they fade,” says Father Juan José. “I’ve been where they are, had those experiences, and yet I see something that’s more important. I think it helps kind of open a door of conversation where I can connect with them, so even if they do continue to get that engineering job or go to medical school, or whatever it is, they are at least going knowing that that’s just a means, and not an end. So that particular college experience, and my own reason for leaving that and entering religious life, has always been helpful, year after year, when I share that with the students.”

And for Father Juan José, it’s through those personal and genuine conversations with his students where he really gets to know who they truly are as well. “They’re so authentic in many ways, and you can get an insight into what’s in their hearts. It’s amazing to see that beneath all the masks of their Instagram posts, their TikTok videos, and their concern for what people think, deep down, as you talk to them, you discover that they long to live for others, to live sacrifice, to be courageous, and they’ll say it in as many words if you stick around long enough to have that conversation,” says Father Juan José. “And in those conversations, to see that and hear that over and over, the goodness that’s in people – despite their failings, despite their current problems, despite the trouble they’re getting in at school or at home – deep down, everybody is good, and everybody desires something good. And you can see the mark of God in the soul of each one of those students.”

Holy Spirit Prep is returning to in-person instruction this August, and Father Juan José, along with the faculty, staff, and the rest of the campus ministry team, can’t wait to see the students face-to-face once again. “We’re making great efforts to actually have in-person classes, because we all share the same mission. It’s not just the chaplain, but the teachers, the administrators, see the value of being able to form our students with that personal contact,” says Father Juan José. “Not having that has been hard, but what we’re hoping is that we can restart some of these things, and think of smaller, spontaneous things that we can do, so we continue building up that community. It’s so important, especially for young people, to have that community, to find other people who think like they think, who long for the same things, who can build each other up, and that’s what I’m looking forward to.” 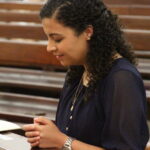