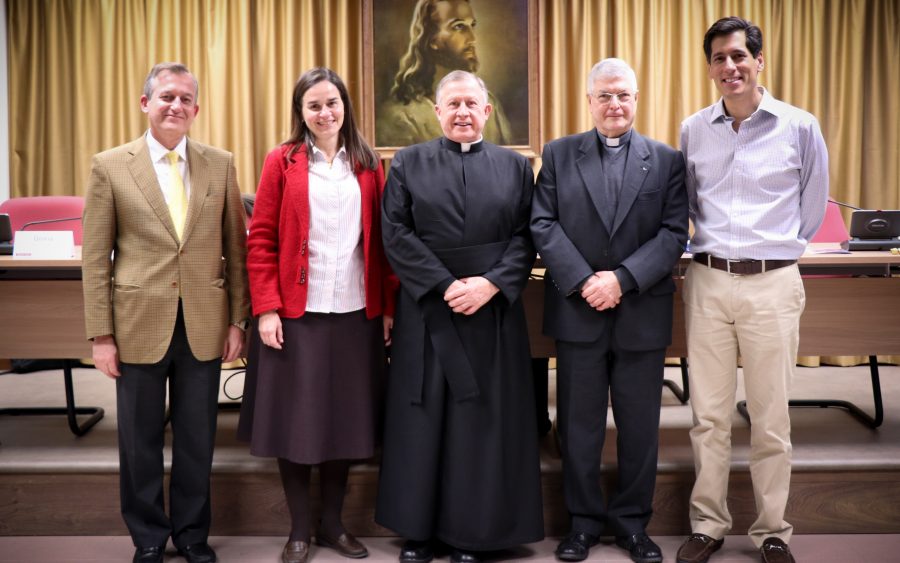 To the members of Regnum Christi

It is with great joy that we write this letter to inform you that today we received from the Congregation for Institutes of Consecrated Life and Societies of Apostolic Life (CICLSAL) the decree establishing the Regnum Christi Federation and approving its Statutes. The letter and the decree, which are enclosed, bear the date of May 31st, the feast of the Visitation of the Blessed Virgin Mary, with whom we intone our own Magnificat. We thank God for all that he has done for us, we thank the Church for her guidance through the competent dicastery of the Holy See, and we thank the pontifical assistant that was assigned to us, Father Gianfranco Ghirlanda, SJ.

This approval closes an important stage in our history. In these years, we have sought to understand more deeply the identity of Regnum Christi in order to find a canonical structure that helps us safeguard the spirit and live the mission that springs from our charism. The pontifical approval of the Regnum Christi Federation is a confirmation of our discernment and of the Statutes as a valid instrument to give continuity and a new projection to God’s plan for our spiritual family.

We would like to take this opportunity to also thank the thousands of Regnum Christi members who, according to their diverse vocations and as an expression of their co-responsibility, have contributed with their prayers, their ideas and their initiatives to make possible what we are today. The path has been a challenge, sometimes with difficulties and tensions, but it has resulted in this step that is not the personal achievement of one person but the joint effort of all, seeking to be docile to the Holy Spirit.

As you can see, in the enclosed final text of the Statutes, the changes introduced by the CICLSAL refer mainly to technical terminology (in the statutory text, the term “branches of the Federation” was replaced by “federated institutions”) and to the simplification of the rules regarding the government—moving the numbers that delineate the territorial and local government to another legislative code of the Federation, without taking away from their validity. In addition, some numbers were adjusted to ensure that the section “The Authority in the Federation” fully respects all the canonical competencies that belong to the federated institutions. Finally, regarding the length of the section “The Spiritual Foundations of the Regnum Christi Federation,” the CICLSAL has approved keeping numbers 6 to 26 as they had been voted on by the Assemblies and by the General Chapter in December 2018.

After having consulted the secretary of the CICLSAL, we decided to set September 15, 2019, as the date that the Statutes of the Regnum Christi Federation will go into effect. In the coming weeks, we will continue to prepare to set up the new governing bodies and their work teams. In addition, we will work on the General Regulations of the Regnum Christi Federation that will include the numbers about the territorial and local authorities, according to the texts approved in December, as well as other applicable norms and support materials for the understanding and dissemination of the Statutes.

The Rule of Life of the Lay Faithful Associated in the Regnum Christi Federation, approved by the extraordinary General Assembly of 2018, will also go into effect on September 15, 2019, with due editorial adjustments according to the definitive version of the Statutes. We also enclose this Rule of Life so that it can be utilized as a study text as well as used in the summer training activities.

We join with the hope that Archbishop José Rodríguez Carballo, OFM, expresses in his letter and we ask God that this “new structure of communion contributes to promote and deepen the common charism and to favor collaboration” in view of the mission that the Church has entrusted us. We invite you all to celebrate the next Solemnity of the Sacred Heart (Friday, June 28, 2019) in thanksgiving for the constitution of the Regnum Christi Federation and the approval of its Statutes. On the occasion of the Solemnity of Christ the King, on November 24, 2019, in all localities we will renew spiritually our belonging to Regnum Christi and our commitment to “make present the Kingdom of Christ in the heart of men and in society” (EFRC 7).

Christ our King, thy kingdom come!

General Director of the Congregation of the Legionaries of Christ

General Director of the Society of Apostolic Life of the Consecrated

*The above enclosures are being translated into English and will be distributed when available. We apologize for the delay.