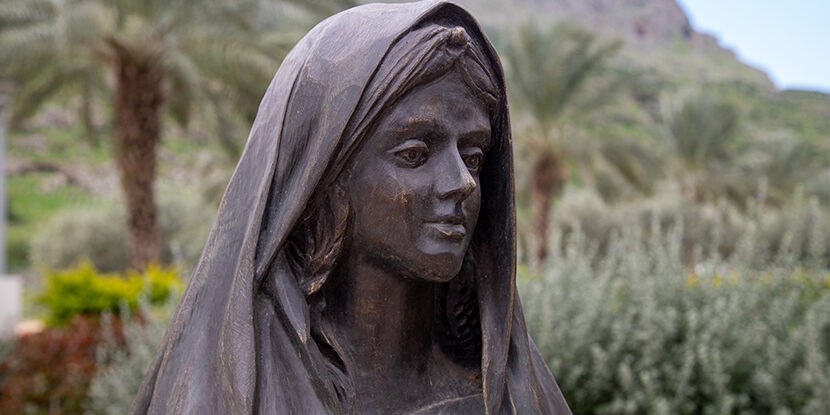 Magdala is a unique Holy Land site with a first century city including a synagogue where the Jewish residents gathered, and where Jesus visited and taught. It is home to the beautiful Duc In Altum, which provides a place for worship, Mass, and prayer, and the Magdala Guesthouse, a unique hospitality experience for visitors and pilgrims to the Holy Land.

The ancient town of Magdala was established in the Hellenistic Period and grew to a thriving fishing village by the time the Romans invaded the Galilee in 67 AD. Situated on the shores of the Lake of Galilee along a major commercial trade route, the Via Maris, and on the way from Nazareth to Capernaum, Magdala was an active city filled with fishermen, shopkeepers, and townspeople. Providentially uncovered in 2009, archaeological discoveries indicate the presence of an observant Jewish Community in Magdala, as is evidenced in its First Century Synagogue. This synagogue is one of seven in the world and the best preserved today. In the center of the synagogue archeologists found the Magdala Stone, a discovery they have quoted to be, “one of the most significant finds in the past 50 years.”

It is in Magdala where Jesus likely taught the multitudes and healed the afflicted including a woman who made her hometown famous, Mary Magdalene.

As archaeologists continued to dig, they discovered an entire first century Jewish town lying just below the surface. With only 10% of the archaeology uncovered, the hometown of Mary Magdalene already provides pilgrims an authentic location to walk where Jesus taught and to connect with the first century life of Jesus’ followers.

Magdala invites you to join us on our third virtual pilgrimage through the Holy Land this October, themed, “A Virtual Pilgrimage of Healing & Hope with Mary Magdalene.”

The pilgrimage will be led by Kathleen Nichols, Magdala Inspiration Director and Consecrated Woman of Regnum Christi.

Kathleen lives in the ancient town of Magdala on the Sea of Galilee. She has directed two previous virtual pilgrimages through the Holy Land, both are currently available online:

During the event, pilgrims will make virtual visits to places which speak of the Lord’s healing encounters, with video reflections shared six days a week, Mondays through Saturdays, beginning  September 29th and ending Saturday, November 2nd.

We will begin in Galilee, in the hometown of Mary Magdalene, whose personal loss and suffering were transformed by Jesus into wholeness. She will “accompany us” throughout the month of October as we travel around the Holy Land.

“Jesus went throughout Galilee, teaching in their synagogues, proclaiming the good news of the kingdom, and healing every disease and sickness among the people… people brought to him all who were ill with various diseases, those suffering severe pain, the demon-possessed, those having seizures, and the paralyzed; and he healed them.” (Matthew 4:23-24)

Come and join this great crowd that followed Jesus through Galilee. Show Him your wounds, and witness His healing.

Register here and allow Mary Magdalene to take you by the hand as we embark on this virtual Holy Land pilgrimage.