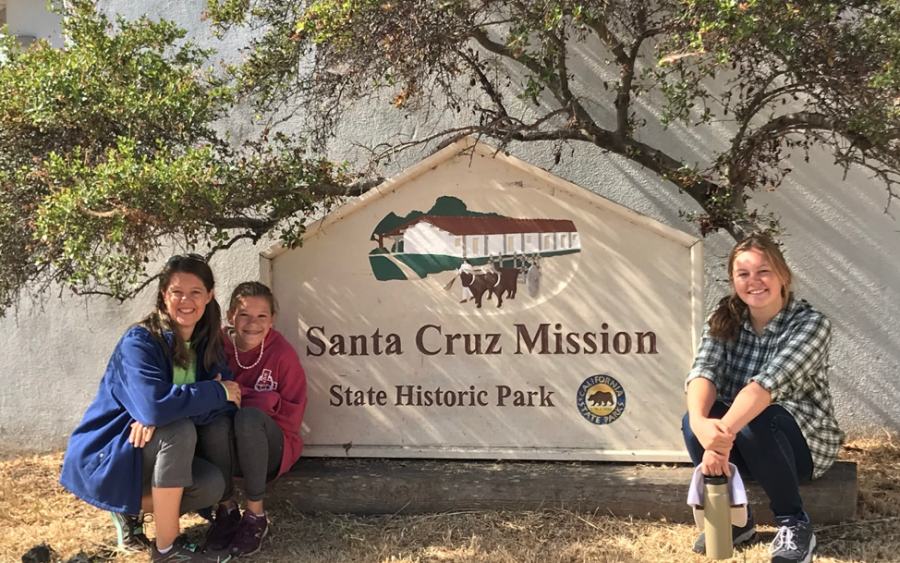 When Atlanta Regnum Christi member, Kelly Henkel found herself on an extended stay in her home state of California caring for her mother, she realized that she was going to be there for the feast day of the recently canonized St Junipero Serra. St. Junipero is considered the founder of California, and Pope Francis has declared him the patron saint of evangelization. “As a third generation Californian, I was raised learning about Fr. Serra and the Catholic missions he founded.” Kelly shared, “My family often attended mass at the San Luis Obispo Mission. Making a visit to the mission with my children is always on the list of things we must do when we are visiting my parents.” For the July 1st feast day, Kelly was interested in taking her children to the Mission of Carmel, where St. Junipero Serra is buried, but had a difficult time finding information on any planned activities for that feast day. Then she remembered an article she read months earlier on the Regnum Christi website that told about a Legionary priest who was leading a walking pilgrimage on the Camino Serra between several of the missions, and ending at the Carmel Mission. Just days before the pilgrimage began, Kelly contacted Fr. Thomas Vendetti to ask if she could join the group.

Fr. Thomas’ devotion to St. Junipero Serra began when he received an assignment at Our Lady of Santa Clara Retreat Center in Cupertino, CA. He recalls one day, another July 1st, when he noticed in his Magnificat missal that it was the first feast day of St. Junipero Serra celebrated after his canonization by Pope Francis.  “I read his story and everything I could find about his life. That day I decided to drive to the mission at Carmel to visit his tomb. I tried to get the other priests and brothers to join me, but no one could make it.  I finally sent a text saying there were five going and if anyone else wanted to go they would have to get another car… The five were the Father, the Son, the Holy Spirit, the Blessed Virgin Mary and me!” After that first pilgrimage, Fr. Thomas began to invite others to make pilgrim journeys to the missions surrounding his community. This was the fourth time he had walked or biked parts of the “Camino Serra,” and while he had originally planned to take a youth group from Miami, God had other plans for the 3-day Camino Serra 2018 pilgrimage. 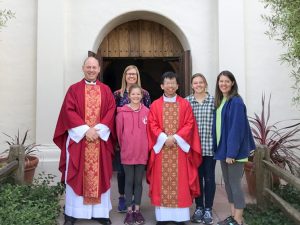 Picture: Some of the Camino Serra Pilgrims with Fr. Dat Nguyen at Mission Santa Cruz

The day began with Mass for the Solemnity of Sts. Peter and Paul at Mission Santa Cruz where Fr. Thomas concelebrated with the parochial vicar, Fr. Dat Nguyen.  The pilgrims received the blessing of this newly ordained priest and enjoyed an outdoor breakfast on the mission grounds before departing.

The first thirteen miles were walked along the beach from Capitola to Moss Landing.  Walking on the sand proved to be more difficult than anticipated but the pilgrims offered up the sore joints and exhaustion for the personal intentions each carried with them. An unplanned water crossing was necessary at the end of Day One when high tide made it impossible to reach the car. For Marianne Shallal, a pilgrim from San Jose, the water experience was not only a physical refreshment at the end of a long day but a spiritual refreshment as well. “The water rejuvenated me and brought me to a place of intimacy with Christ. I was fed in a way I shall not forget…” 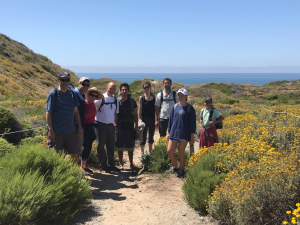 Picture: Pilgrims walk the Camino Serra beside the Mustard Bushes which St. Junipero Serra himself planted to mark the way between the California missions

More pilgrims joined the group and the day began with Mass at Our Lady of Refuge Catholic Church in Castroville, CA, followed by fellowship at breakfast which was provided by the Wieck family. Eileen Wieck, a Regnum Christi member of 25 years, was unable to walk the Camino due to her pregnancy with the family’s 6thchild, but shared that “even serving breakfast was an opportunity to experience the pilgrimage.” As with all pilgrim journeys, hers was not without difficulties. “My well-laid plans were washed aside quickly when I blew out not one, but six outlets in the kitchen of the parish hall! Folks were hungry and waiting for coffee and eggs…we were delayed for well over thirty minutes. I asked Fr. Justin Kielhorn to say a quick prayer and within a minute I was able to find a single outlet. A great reminder that the best-laid plans are not our own and we need to surrender everything to Him!”

The walking began just south of Moss Landing on the Monterey Peninsula Trail, which follows parts of the original Camino Real, the Kings Highway – the route that St. Junipero Serra followed in the founding of the twenty-one missions. Fr Justin Kielhorn pointed out that the mustard bushes, adorned with bright yellow flowers, planted along the route were not plants native to California.  Fr. Serra himself sowed the mustard seeds to mark the way between missions. As they walked, the group prayed the rosary for the conversion of California and all the people who were passed and encountered along the way. Fr. Justin commented that “California is such a richly blessed place. So many natural resources, so much beauty, so much talent and yet so much thirst! It is a place for adventurers, entrepreneurs, and above all searchers who thirst and yearn. There is a need here for missionaries who with a simple smile and look of love, know how to walk the pilgrim way of life with the people of California and together with them discover the Way the Truth, the Life…simply LOVE.”

After thirteen miles, the group stopped at the Cathedral of Monterey which was the original location of the mission that Fr. Serra founded before relocating it to Carmel. A local parishioner greeted the group upon their arrival and prepared a delicious meal for the pilgrims.  It was a festive evening of sharing stories, laughter, and song. Pilgrim Emilio Mitre brought his guitar and serenaded the group with songs that he himself had composed. 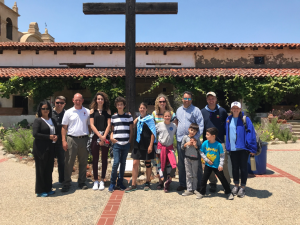 The final day of the Camino Serra started out with even more pilgrims joining the group for breakfast and for the six-mile walk from the cathedral to their final destination: the tomb of St. Junipero Serra at Mission Carmel. The last stretch of the journey included several chance encounters that had the mark of God’s Providence on them. The first was a group of youth from Colorado with whom Fr. Justin had been in contact to plan some missionary aid to the victims of wildfires in Santa Rosa.  Although the Colorado group ended up working with another organization for the relief efforts, they decided to walk the Camino for the final day – unbeknownst to anyone.  Their paths crossed again when the two groups literally bumped into each other four miles out from Mission Carmel.  The Caraballo family,  RC members from Atlanta who were in California for a family vacation, joined the pilgrimage and attended mass with the group at Mission Carmel.  Marianna Caraballo commented, “The fact that we were able to be part of that mass celebrating St. Junipero Serra’s feast day was all God. Learning about the hard work he did, being a missionary in California was amazing! Seeing how the group walked in the very steps he did was so awesome and inspiring. His example should motivate us all to be missionaries in our daily lives.”

After the mass which Fr. Thomas and Fr. Justin concelebrated with the mission’s pastor, Fr Paul Murphy, there was a procession with a relic of St. Junipero into the courtyard where a large reception and feast day celebration was prepared. The Legionaries were given the opportunity to address the crowd and share the experience of the past days. When they had concluded, a woman from the crowd approached them excitedly. Luisa Sui, a Regnum Christi member from Toronto who was visiting her daughter in San Francisco, had driven down to Mission Carmel just for St. Junipero’s feast day to attend mass.  She joined the group for a special docent tour of the mission and 16-year-old ECYD member, Jeanne Henkel remarked, “Regnum Christi is One. Big. Family.”

Fr. Thomas invites more pilgrims to join him and share this incredible experience, “Not only the last day, but the entire pilgrimage was providential from beginning to end.  God sent unexpected pilgrims, unexpected meals were provided, and our strength was sustained throughout the journey.  I am so grateful to the pastors who opened their doors to us at Mission Santa Cruz, Our Lady of Refuge, and Mission Carmel.  God willing, we will repeat the experience next year.  For Camino Serra 2019 we plan to add on a few more missions by starting farther north and extending the pilgrimage to a full week going from June 24 to July 1.  If you want to walk in the footsteps of the first missionaries and continue sowing the seeds of the Gospel, contact me at [email protected].”