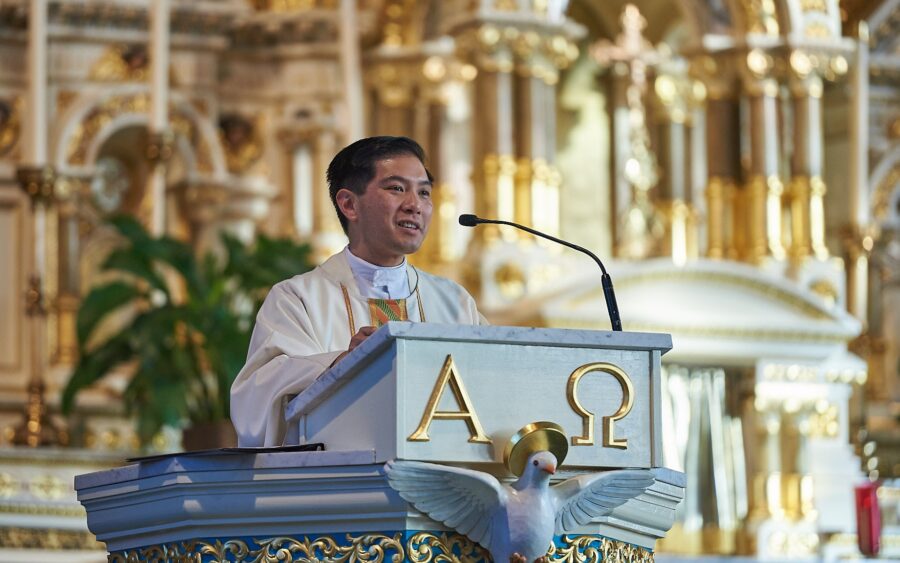 When Father Brett Taira, LC, began his role as Regnum Christi Director of the Chicago locality in May of 2017, he was bringing a much-needed sense of consistency and constancy. “The greatest issue RC members faced in Chicago was a stability in leadership,” says Father Brett, who was the third director the locality had seen over the year before his arrival to Chicago. That sense of continuity would become increasingly important throughout the duration of his two-and-a-half year term.

According to Father Brett, the primary function of his role as RC Director was to facilitate “communication, collaboration, and communion on the local level in fulfillment of Regnum Christi’s mission to reveal Christ’s love, gather and form apostles, and send and accompany them in mission.” For him, in Chicago, this meant such responsibilities as chairing the Regnum Christi local committee, coordinating the execution of the locality’s evangelization plan, keeping in touch with heads of major local apostolates and institutions, and serving as a contact between the Regnum Christi territorial government and the locality.

But the primary role of the local RC Director is a role of relationship. “Most of the RC Director’s influence is through trust and moral authority,” says Father Brett, “which implies that the majority of his time should be spent on developing strong relationships.”

It is this aspect of relationship building that Father Brett enjoyed most about his tenure as RC Director in Chicago. “The RC Director is in a privileged position to get to know everyone in his locality, whether they be involved in ECYD, Lumen, a school, running retreats, or working in fundraising and development,” says Father Brett. “You can have immediate contact with Regnum Christi life from the basic level of an Encounter with Christ, all the way up to a national event like a Formator’s Convention. It’s a perfect position if you like to see how the activities on the ground connect all the way up with the big picture.”

On May 31, 2019, after a decades-long process of discernment, reform, and renewal between Regnum Christi members and the Holy See, the Congregation for Institutes of Consecrated Life and Societies of Apostolic Life canonically established the Regnum Christi Federation, and approved its statutes. This canonical form of federation is new to Regnum Christi, as are the revised statutes that go along with this new organizational form, and it was helping the RC members within his locality to adapt to this “newness” that became the latest focus of Father Brett’s directive role.

“The role of the RC Director has evolved since the establishment of the Federation,” says Father Brett, who was asked to help give some perspective to his own RC members in Chicago, as well and other RC Directors throughout North America, on what these new canonical changes might look like. What people really need to know is the why,” says Father Brett. “Why does the Federation help us to better live our spiritual identity? How does it allow us to better be an apostolic body, … a living family, a living spiritual organism of the church?” It was important to communicate to his RC members that the new Regnum Christi Statutes are “not just a series of rules and regulations, not just a corporate or legal structure, but really something alive, a gift of the Holy Spirit to the whole Church.”

Father Brett had to grapple with what the most recent changes to Regnum Christi meant to his own spiritual identity and vocation:

“I remember the day of my profession in Cheshire. I took my first vows, after two years in the Novitiate, professed poverty, chastity, and obedience, in accord with the Constitutions to the Legionaries of Christ. But then, those constitutions have changed; we have new additional constitutions for 2014, and those weren’t the ones that I professed to originally. Did they change my vocation? Did they change the meaning of my life? Did they change who I was? Did my identity just get taken away from me, involuntarily?

The spiritual image that was Father Brett’s inspiration as he helped his RC members to make sense of the new changes in Regnum Christi’s statutes and canonical form comes from the Book of Jeremiah: “Like clay in the hand of the potter, so are you in My hand.” For Father Brett, this scriptural image was key as he journeyed with his RC members through the renewal process. “It’s important to realize that there is a process here, there is a change that’s happening, there is a molding going on,” says Father Brett. “The Regnum Christi Federation is an expression of God’s plan. This is something unfolding before my eyes, like that block of clay.”

And to Father Brett, that process of allowing oneself to be molded by God like clay by the potter means not only accepting change, but also not being afraid of it, since even in the change, God remains the constant. “We want to see that there’s continuity, just as the block of clay has been molded in God’s hands, so we’ve been molded in God’s hands over time, “ says Father Brett. “We don’t need to be afraid of this change, because God is the one who is molding us.” Father Brett reminded his RC members that while they contemplate how God is molding the clay and where He is leading Regnum Christi into the future, they should, at the same time, remember and ponder the mystery of God’s steadfastness through it all.

For Father Brett, this faith in the trustworthiness and steadfastness of God is key to helping RC members making sense of change; it’s not clarity of rules and methods that leads to faith, but faith – in God, in one’s Christian identity, and in the mission – the gives rise to clarity. And with this faith-driven clarity, says Father Brett, his members were able to move forward in this new phase of Regnum Christi’s history with renewed confidence and enthusiasm. “We’re still seeking to make present the Kingdom of Christ. That has not changed. That is who we are. We have to trust that it’s God who’s leading us through these changes.”